Exciting Start to the Season

The results of this exciting 1st event, humble some of the best.

Since year 1 of the SWBA, it’s been a tradition to kick-off the season with a Spotted Bay Bass event.  2016 was no different, and San Diego bay was the venue of choice this go around. With Taco Surf and Bass Underground teaming up to present the 2016 season opener, and Abu Garcia continuing to lead the charge for SWBA, the stage was set for a great year ahead. The day started out early, with 43 teams assembling at the Chula Vista Marina Park under a clear chilly morning.  A hot cup of coffee hit the spot at check-in, as old friends, and new, got caught  up from the off season before idling out to blast-off. Once the playing of the national anthem had concluded, it took less than 5 minutes to get all 43 teams past the starting boat at safe light. A short time later, the sun had risen over the horizon, revealing the big bay, which had swallowed up the entire field as if there was never a single boat on the water. That place is HUGE!

It didn’t take too long for the tournament boat to find a few teams right back in their usual haunts, chuckin and winding the standard spottie hardware. With a high tide peaking at 7:15, we expected to see more fish coming over the rail than there was. The weather had been improving all week leading up to the event, with a predicted high of 80 degrees on tournament day. The water temp. however was in the low 50’s, and by 10:00 am it was t-shirt & shorts weather.

We drove around from marina to marina interviewing teams, taking pictures, and getting on-the-water reports, and the common theme seemed to be ‘limits of slow’ ! This was really not expected considering the favorable tide and weather that had settled in throughout the week, perhaps it was a little ‘too nice’ for February. As teams buzzed back and forth, a typical sign of teams struggling, the clock ticked away at it’s usual accelerated game-day pace. One nice thing about this venue/ format is that it truly is a ‘cabin fever reliever’, especially when it’s pushing 80 degrees in February! Even when the bite is tough like it was, spottie fishing is low-impact and the perfect way to get the season rolling.

At weigh-in, the stories kept being repeated of countless sub legal spotties. You’ve never seen so may teams happy to weigh just 1 fish ! With the scale set-up near the launch ramp, it became pretty obvious this was going to be a ‘slim’ event as team after team passed the weigh-in, only to put their rigs straight on the trailer.  Ouch. But as the story so often goes, someone always gets ’em  . . . and while on this particular Saturday it may have been only 1 team . . . that’s all it took.

Former SWBA Anglers of the year Al Miqueliez and Rex McConnell had a plan to ‘grind-it-out’ in one area, and their plan worked. With their 5th and final keeper coming just 5 minutes before they had to leave for check-in, Team Basstards would ultimately weigh the ONLY 5 fish limit of the event, and take the victory with 7.25 Lbs. They took home over $3000.00 in cash and a pair Abu Garcia Revo Inshore reels to go with some insane Bohnhoff Lumber Trophies. They credited their win to a persistence and a few key baits, a green proline / phenix lures spinner bait, a Pearl swim bait, and an unspecified crank bait. 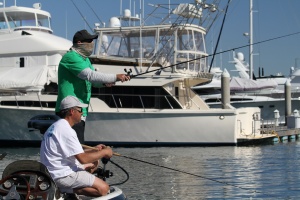 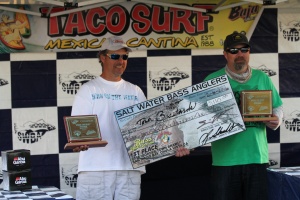 Bobby Martinez fishing the event without his team partner Kenny Bobo came in second place with 5.78 Lbs., a very respectful accomplishment considering the slow fishing that day. Congratulations Bobby on a great finish and a solid start to the season. 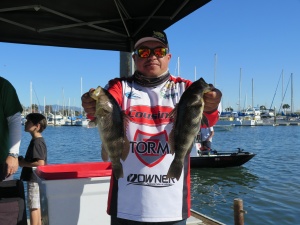 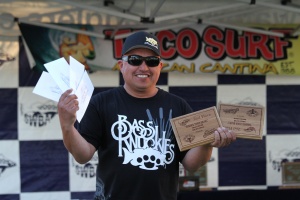 In third place was first time SWBA anglers Ken Rosburg and Gilbert Hernandez with 5.60. Ken and Gilbert fish the SBS Circuit and took advantage of the carry-over points program offered this season. They’re really good sticks and very classy guys, look for them to do well in 2016! 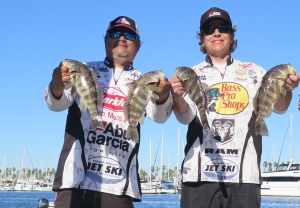 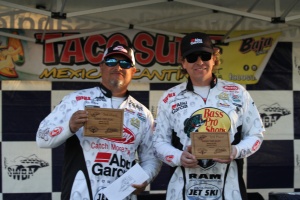 Special mention goes out to the fourth place team of Maverick Graham and Mike Rago, I believe this was their first actual tournament ever, and Maverick purchased the boat they used the week of the tournament ! They won the KAENON ‘Big Bass Award’  by weighing the heaviest Spottie of the event at 2.18 Lbs. and took home close to $2000.00.That’s the stuff that makes these events so great ! 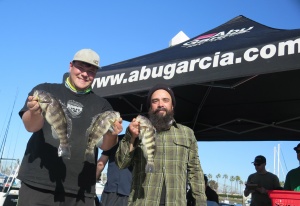 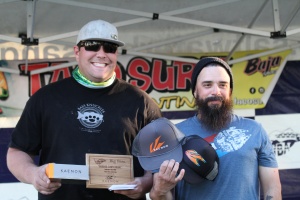 We’d like to sincerely thank our great sponsors Taco Surf and Bass Underground for presenting the ‘Border Town Brawl’,  without there support, these events wouldn’t be possible. Remember Taco Surf offers anglers 20% off meals at all locations, with a valid CA fishing License.

We know you all have choices in your purchases and we ask you to please consider supporting the people & companies who allow SWBA to present these premier events!

We’ll see you at the next event !

No Replies to "Exciting Start to the Season"