Welcome to Norbuland! North of Malibu… 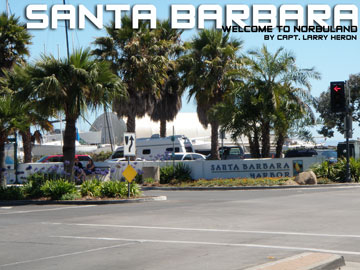 So you’re making the trek up to the Northern most region of our beloved Paralabrax and you’re asking yourself now what? Well the Santa Barbara county coastline isn’t so different than the rest of Southern California; it has lush kelp beds, rocky bottom, hard bottom, reefs etc. What it may lack is the mass amounts of visible shoreline structure that you might find along the L.A. /Orange County coastline, but rest assured there is plenty to fish!

What I am going to do is give an overview of what’s on tap so you can choose which direction to look based on the types of structure you like, as well as a few other tidbits that might be useful.

The Santa Barbara County coast is approximately 60 miles long from Pitas Point to the south, up to Point Conception to the north, so what I am going to do is break it up into three areas I like to fish.

Just outside the harbor

To begin we have the area we call out front. First of all, unfortunately, the break wall in Santa Barbara is useless as a bass fishery as it is high and dry at negative low tides and has no structure in the water that holds more than surfperch!

“Not to fear small boaters, there is tons of stuff out front to fish for if you have a meter on your rig”.

Let’s start with the One mile area, head out on a 145-160 degree heading as the reefy area starts in about 60ft of water and extends out to about 100ft and covers an area that’s at least a mile in every direction, keep in mind it’s not all real tall relief most is just hard bottom so take some time to meter around. Another spot to look for on the charts is Camby’s Reef as well as the Ledbetter area up to the lighthouse, this area has great little kelp beds with ribbon reef and some cobble.

Down the line, working south to North:

From Pitas point to the far South to Arco Island you find kelp and small amounts of patch reef, there is Arco Island itself if you want some visible structure to pitch to, up close it looks like giant jacks that have tons of places for the bass to hide. Continuing North you have Rincon Point Reef right off Bates Point, again mostly hard bottom with some kelp, then there’s Carpentaria Reef that you can actually see breaking from the freeway some days, huge area with kelp, hard bottom and even some boilers on the inside. Then there’s Horseshoe Kelp, Horseshoe Rock, Summerland Kelp, and if you meter around you would be surprised what you might find off Carpentaria!

Above the harbor working south to North:

This is where it gets a little more tricky as this is forty plus Nautical miles of coast line, some of which I haven’t even explored in my 20 years of fishing Santa Barbara so I am going to mention a bunch of areas to look for, Mohawk Reef, the Mesa, Hope Ranch, Goleta Cove, Campus Point, and Devereux Point. Then there is the Haskell’s area, Ellwood Pier (killer spot out in front of it) Naples Reef, El Capitan , Refugio, Tajigas and miles and miles of kelp to fish all the way up to Point Conception where you will find some killer looking shoreline stuff!

Now all of the spots mentioned are well known spots, but if you come up in explorer mode I am sure there tons of spots in between that are over looked that somebody who is not stuck in regular spots mode will find. Look for movement, as in this region most spots respond to uphill or downhill currents rather than in or out, look for forage, look for birds or anything else that looks fishy! Also remember like most areas in Southern California (especially P.V.) Santa Barbara can be like a light switch in regards to the bite, and the killer bite can come at any time of the day, not just in the grey! 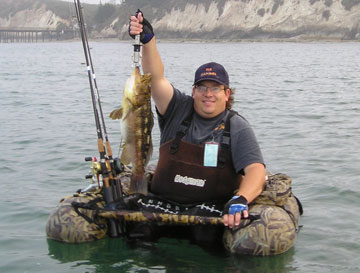 Basic hardware to face the task

Let’s talk about the tackle side of things, normally I use a lot of bigger swimbaits in the 5.5-6.5in range, but Santa Barbara is one area that the 3-5in baits really excel! Now if you find the killer bite don’t be afraid to feed them the big stuff, but you will be well served to bring some of the smaller baits and fish them on 10-12lb if you find yourself blanking.

Iron: Naples Reef is one of the best spots I’ve ever thrown a jig at; that is if it has uphill current!

Cranks, blades, and slugs: With all that kelp around bring the hardware! Those fish never see that stuff as the locals never fish it!

Colors: Typically the fish out front and down south respond to critter colors, browns, reds, oranges and or combinations of all three. The fish up north really like the baitfish stuff this time of year, mackerel, sardine and trout patterns are among my favorites

“Like everywhere bass call home these are not absolutes, however, the key here is to mix it up!”

Other tidbits: If you choose to go north be careful for the first few miles as there are numerous buoys and other objects to hit especially off Arroyo Burro beach.

The tar you may acquire if you head North looks worse than it is, yes it mucks up your boat but a strong mixture of Simple Green and water will take most of it off and as for the tough spots a little solvent/acetone on a rag takes it off real easy.

Getting here safely is key!

Northbound on the 101: Exit Garden Street and turn left on Garden after coming down the off ramp. Continue to where Garden intersects with Cabrillo Blvd and turn right on Cabrillo. Continue down Cabrillo paralleling the beach past the wharf. Shortly past the wharf, the first buildings on your left hand side will be Sea Landing.

To park you must continue past Sea Landing staying on Cabrillo until you reach Harbor Way . Turn left on Harbor Way and then immediately left again towards the parking kiosk which you will see on the left about 150 feet to the left from Harbor Way . Enter the lot there and drive straight back to Sea Landing, the launch ramp is right next to Sea Landing. Keep in mind that double length stalls are for vehicles with trailers only.

There is three water hook ups at the ramp that take quarters. There are two decent docks that hold a fair amount of boats and the lot isn’t too bad but I would get there early, otherwise depending on how many boats show, you may have to resort to the over flow at the City College parking lot.

Well I hope that some of this helpful and that everybody has a good time up in ‘Norbuland’ as it is one of my favorite places to fish and an oasis when the weather in the Santa Barbara Channel is up.

See you up there!

No Replies to "Welcome to Norbuland! North of Malibu..."